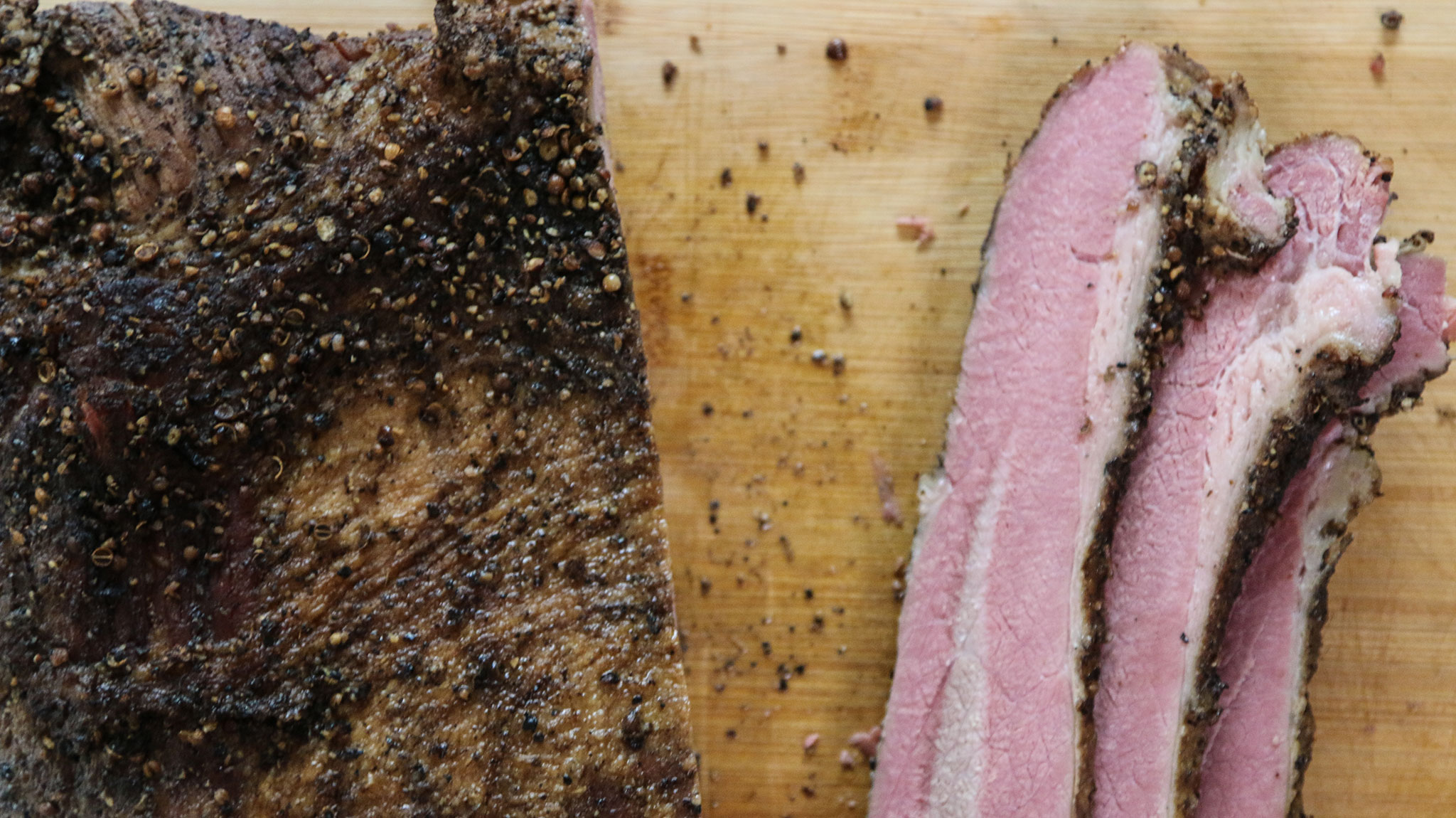 Arguably one of the most important creations in the history of mankind came from a small town in the southeastern part of England in the early 1700s. Here, a man who held titles that included Postmaster General, First Lord of the Admiralty, and Secretary of State for the Northern Department, was also known as a serial gambler. He would stay at the card table for hours upon end, and in order to both sustain himself, and to ensure he could hold his cards in one hand and eat with the other, he requested that his meat be served between 2 slices of bread. Yes, the world became a much better place upon the creation named after John Montagu, the 4th earl of Sandwich.

Today, Pastrami is the delicatessen meat of lore. Coated with coriander and peppercorns, layered with smoke and char, with one slice of the knife, its pink juices will run down the cutting board, and you'll know right then that if there's any sandwich that's fit for an earl, it's the one you're about to eat.

If your stockpot will not fit in the refrigerator, find a suitable non-reactive container for storing the brine and briskets for 5 days. 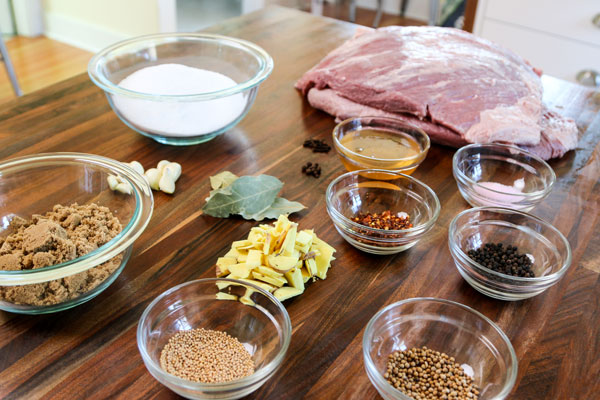 Set aside ¼ cup black peppercorns and ¼ cup coriander seeds for day 5, to coat the brisket just before smoking.

Measure out 1 gallon of water for the brine. 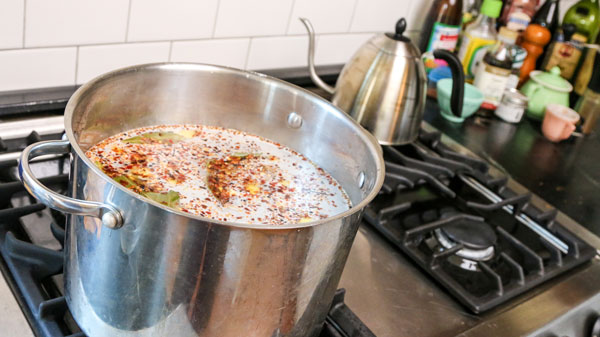 Peel and halve the garlic. Peel and coarsely chop the ginger.

Place 1 gallon of water and all of the ingredients (except for the beef brisket, ice, ¼ cup black peppercorns and ¼ cup coriander seeds) in a large stockpot, and turn the heating element to high.

Once the water is brought to a boil, reduce to a simmer for 5 minutes. Turn off the heat. Add 5 lbs. ice cubes to the brine in order to quickly bring the liquid down to room temperature. 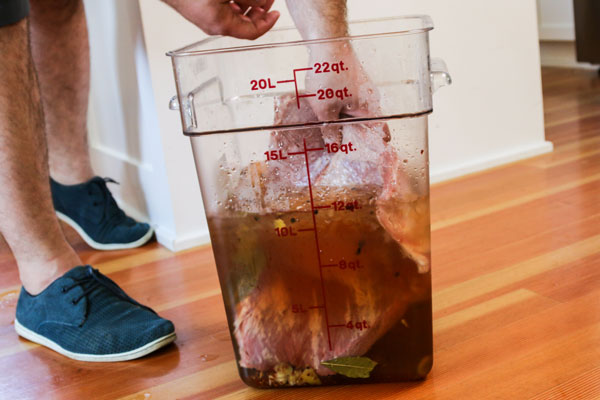 Rinse the brisket under cold water.

If your stockpot will not fit in the refrigerator, ladle the brine into a non-reactive container. Label the container Pastrami: Smoke on May 10, 2015.

Submerse the briskets in the brine. Refrigerate for 4 days. Check the brine once per day to ensure the brisket is completely submerged in the liquid. 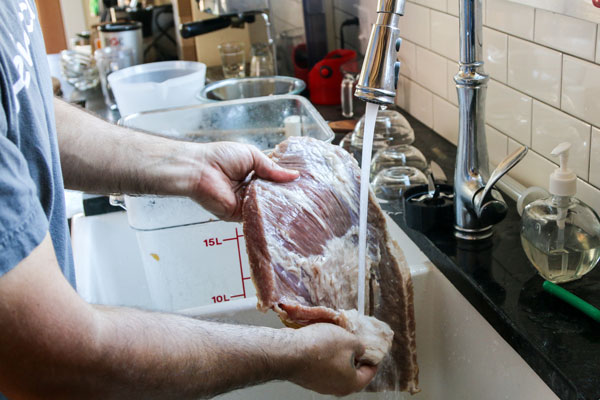 4 days after brining the briskets, remove it from the brine. Run warm water over the brisket to remove any brining ingredients that may have stuck to it. Dry the briskets off with paper towels. 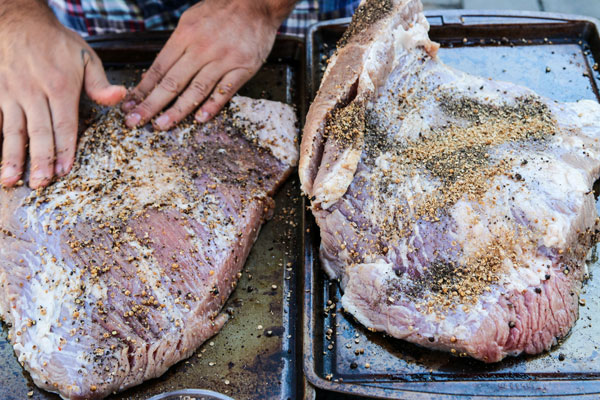 Pulverize ¼ cup black peppercorns and ¼ cup coriander seeds in a spice grinder until they reach a medium-fine consistency.

Sprinkle the spices over each side of both of the briskets. 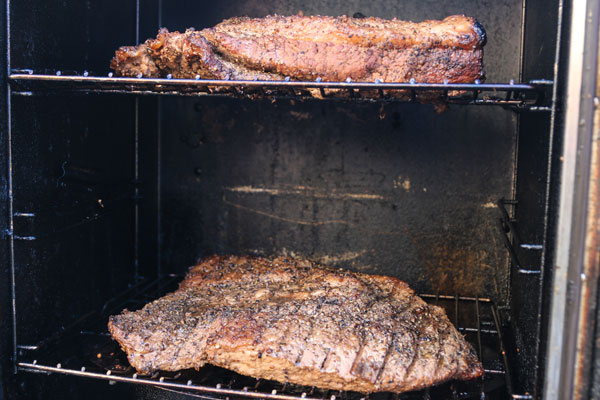 Using oak or mesquite wood chips, smoke the brisket at 180°F / 82°C until it reaches an internal temperature of 150°F / 65°C. Depending on your smoker and the personality of your brisket, this could take 3 hours, or it could take 6 hours.

Once a meat thermometer shows a reading of 150°F / 65°C in the center, remove the brisket from the smoker. 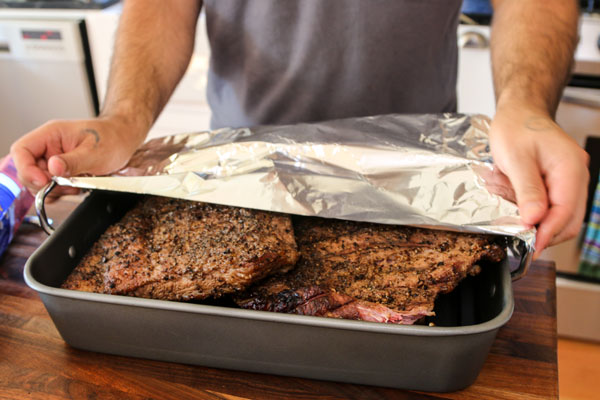 Allow the water to simmer for 2 to 3 hours, until the brisket is fork tender. Check the water occasionally and add more if too much water has evaporated. 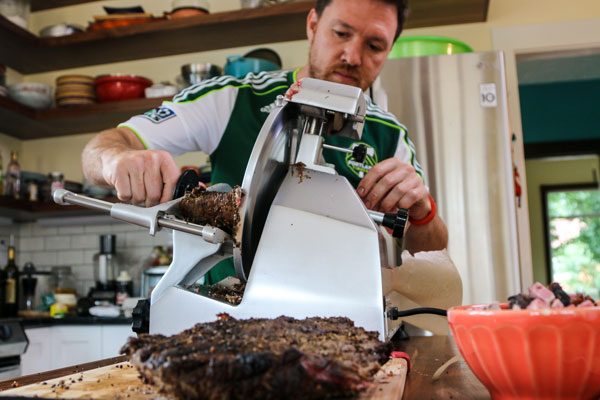 Once the Pastrami is fork tender, remove from the oven to a cutting board and allow to rest for 15 minutes.

Use a meat slicer or a sharp chef's knife to slice the Pastrami. Slice it thin for sandwiches, or dice it thick for Pastrami Hash. 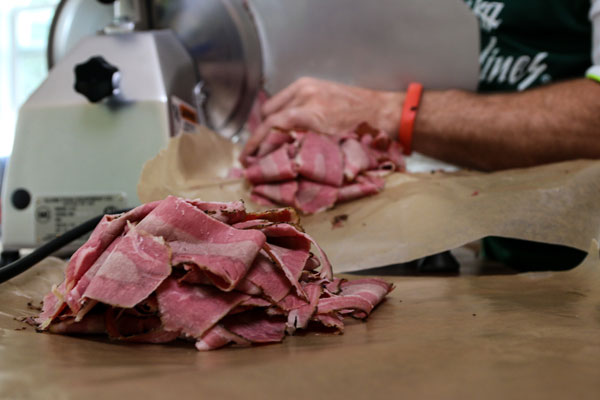 Serve as a standalone meat, in a Pastrami Hash, or use it to make one mean mother fuckin' Pastrami on rye sammie.